Amy Coney Barrett told a Jacksonville University audience in 2016 that the Supreme Court is unlikely to overturn a woman’s right to an abortion, the key holding of the landmark Roe v. Wade decision.

However, Barrett has written law review articles that outline arguments attorneys theoretically could use in trying to strike down that ruling and other precedents, though the writings are analyses that don’t urge specific action or say how she would decide specific cases. Among them: She cited legal experts who do not count Roe v. Wade among “superprecedents” – Supreme Court decisions that are so ingrained in American life that they can’t be overturned.

The potential for Barrett to join a 6-3 conservative majority that could erase the controversial nearly 50-year-old ruling is expected to be one flashpoint during her Senate confirmation hearings scheduled to start Monday.

Supreme Court nominees historically have avoided expounding on their views on specific cases and decisions. But since Trump nominated Barrett to the court two weeks ago, the Senate’s Republican majority and opponents of Roe have been heartened by clues from the devout Catholic, whose religion calls for protecting human life from conception to natural death, with rare exceptions.

Confirmation hearings preview: Amid pandemic and presidential race, Barrett’s hearing will be unprecedented

During her years as a law professor, Barrett was a member of the University of Notre Dame’s “Faculty for Life,” and in 2006 she signed an anti-abortion letter that accompanied a newspaper ad calling for “an end to the barbaric legacy of Roe v. Wade.” But she has said she would keep her personal views out of the courtroom.

As an “originalist,” she believes judges must adhere closely to the written text of the Constitution and the plain meaning of language used in statutes at the time they were enacted.

“I tend to agree with those who say that a justice’s duty is to the Constitution and that it is thus more legitimate for her to enforce her best understanding of the Constitution rather than a precedent she thinks clearly in conflict with it,” Barrett wrote in a 2013 Texas Law Review article.

Such statements helped persuade Sen. Josh Hawley, R-Mo., who has said he would not support a Supreme Court nominee unless they agreed with his position that Roe v. Wade was wrongly decided.

“There’s plenty of evidence, I think, to demonstrate that she understands that Roe is – in my words – an act of judicial imperialism,” Hawley told The Washington Post. “And I feel very comfortable with her on that issue.”

“I am very skeptical that precedent will matter at all to Judge Barrett if she is on the Supreme Court and has the chance to overrule Roe v. Wade,” said Erwin Chemerinsky, dean of the University of California’s Berkeley Law and author of “We the People: A Progressive Reading of the Constitution for the Twenty-First Century.”

But Teresa Collett, a professor at the University of St. Thomas School of Law who directs the Minnesota school’s Prolife Center, said Barrett “recognizes the value of stability and predictability in the law,” two benefits “that arise from adhering to judicial precedents.”

The benefits of letting precedent-setting decisions stand “clearly accrue when the reasoning of the cases is clear and persuasive to a large majority of Americans,” said Collett, who said she taught Barrett in a law school course as a visiting professor.

In some judicial rulings, however, “the reasoning is opaque, flawed or unpersuasive,” Collett said. “Those cases can actually be destabilizing and cause a significant number of citizens to lose faith in the political neutrality of the courts. Thus, overturning or reading such cases as narrowly as possible may be appropriate.”

Barrett has described how precedents can be overturned

Although the Supreme Court does overturn previous decisions, it rarely strikes down major precedents. Barrett’s article in the Texas Law Review and other writings explain why.

First, there’s the legal principle of stare decisis, a Latin term that refers to standing by previous rulings when deciding a similar case. Another issue is reliance, a reference to the fact that citizens, businesses and organizations have ordered their lives and affairs on a precedent-setting ruling.

Barrett in her own words: We binge-watched 15 hours of Amy Coney Barrett’s speeches. Here’s what we learned about her judicial philosophy

And then there’s the reputation of the court: protecting it from any suggestion that its decisions are motivated by politics or personal preference rather than sound legal arguments.

After outlining the hurdles, Barrett’s writings cited legal rationales that clear them – essentially arguing that the Supreme Court can overturn precedent without devastating its reputation or upending Americans’ lives.

“Stare decisis is relatively weak in constitutional cases,” she wrote in the Texas Law Review article.

Although justices must consider how their decision could be disruptive, she wrote, they would not overturn precedent “unless at least five justices are certain enough of their own approach to assume the risk of disturbing” the nation’s reliance on the precedent being challenged.

As for public perception, “even assuming that the Court should make decisions with an eye toward its reputation, there is little reason to think that reversals would do it great damage,” Barrett asserted in the Texas Law Review article.

Some Supreme Court decisions have become so deeply part of the fabric of U.S. life and history that some constitutional law specialists have classified them as superprecedents.

“They have five characteristics: endurance over time, support by political institutions, influence over constitutional doctrine, widespread social acquiescence, and widespread judicial agreement that they are no longer worth revisiting,” Barrett wrote in “Congressional Originalism,” a 2017 article she co-wrote with then-Notre Dame Law School Professor John Copeland Nagle in the University of Pennsylvania Journal of Constitutional Law.

Citing lists by some legal experts, Barrett and Nagle wrote that the cases include Marbury v. Madison, the 1803 case that established the U.S. system of judicial review, and Brown v. the Board of Education of Topeka, the 1955 ruling that declared racial segregation in public schools unconstitutional.

Many of the lists compiled by such experts do not include Roe v. Wade. In a footnote to the 2017 article, Barrett and Nagle cited a 2006 University of Minnesota Law Review essay by Michael Gerhardt, a University of North Carolina School of Law professor whose research focuses on constitutional conflicts between presidents and Congress.

“Justices and others who support the outcome in Roe v. Wade may be eager to give Roe ‘super precedent’ status, but the persistent condemnation of Roe, particularly by national political leaders … as well as a current majority of the United States Senate undermines its claim to entrenchment,” Gerhardt wrote.

In her Texas law journal article, Barrett appeared to be open to reassessment of Roe by the Supreme Court.

“If anything, the public response to controversial cases like Roe reflects public rejection of the proposition that stare decisis can declare a permanent victor in a divisive constitutional struggle rather than desire that precedent remain forever unchanging,” she wrote. “Court watchers embrace the possibility of overruling, even if they may want it to be the exception rather than the rule.”

How would Roe v. Wade fare with Barrett on the Supreme Court?

If the Senate confirms Barrett’s nomination, could she provide the legal impetus to overturn the ruling? Legal experts who have examined her writings and court decisions offer conflicting scenarios.

“I don’t doubt that Judge Barrett would be more prepared to overturn significant Supreme Court precedents than anyone on the current Court other than perhaps Justice (Clarence) Thomas,” said Laurence Tribe, a Harvard Law School expert on constitutional law who had a young Barack Obama as a law school researcher.

“Her writing on the subject is admirably candid even if shockingly unconservative,” Tribe said. “She strongly believes that a Supreme Court justice who believes a prior decision, whether about the Constitution or about the meaning of an act of Congress, was wrong should feel free to overrule it without any substantial concern for the importance of stability and predictability in the Court’s jurisprudence.”

Jonathan Turley is a professor at George Washington University Law School who testified in support of Justice Neil Gorsuch’s appointment to the Supreme Court in 2017. Turley said he, too, believes the Supreme Court has at times overemphasized stare decisis.

“Barrett clearly has the intellectual focus and intestinal fortitude to overturn major cases if she views the underlying interpretations to be flawed,” Turley said. “Much like (the late Justice Ruth Bader) Ginsburg, she comes to the Court with a clear jurisprudential foundation.”

Turley said he sees signs that Barrett has “fundamental reservations with the underlying rationale of Roe. … She could well vote to overturn the case but most clearly would support the expansion of state authority over collateral limits and conditions on abortion service.”

In her 2016 Jacksonville lecture, Barrett predicted a conservative-majority Supreme Court could affirm states’ regulations on abortion, though she didn’t expect the fundamental right to an abortion would be overturned. The cases that have come before the court in recent years have generally focused on laws placing restrictions on who can get and perform abortions.

Michael McConnell is a former judge on the Court of Appeals for the Tenth Circuit who was nominated to the post by President George W. Bush. He predicted Barrett would overturn Supreme Court precedents “less often than Justice Ginsburg.”

If Barrett were presented with a state’s “reasonable regulation” on abortion, McConnell predicted “she’s very likely to vote to uphold it.”

“But I don’t think the words ‘Roe v. Wade has been overturned by the Supreme Court’ will be written for some time to come, unless public opinion shifts,” said McConnell, now a professor at Stanford Law School. “Opinion has been relatively stable over time.”

In California: Today’s the deadline to register online to vote; Dodgers head to Series

From innovative to invincible: how successful companies blend startup spirit with corporate management

From innovative to invincible: how successful companies blend startup spirit with corporate management

In California: Today’s the deadline to register online to vote; Dodgers head to Series 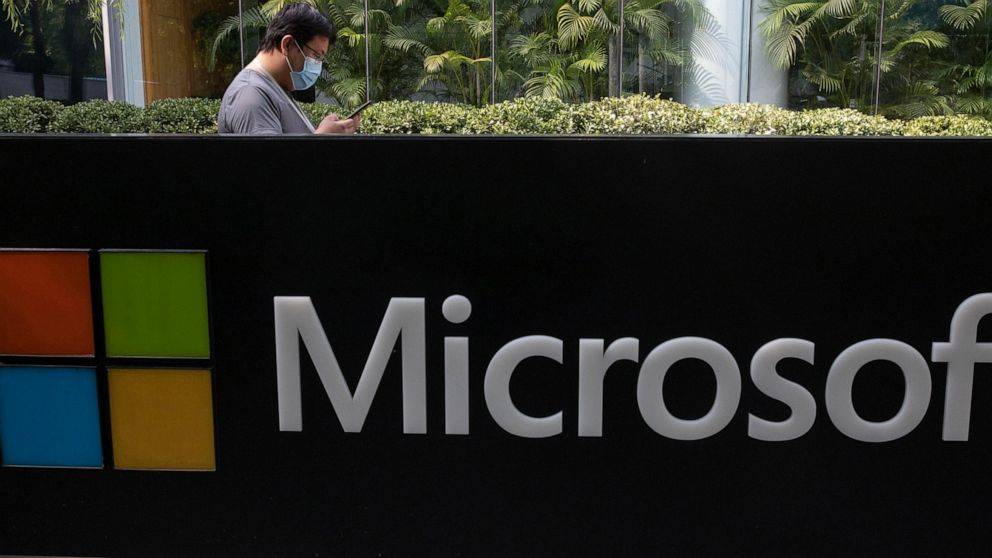 Microsoft attempts takedown of global criminal botnet
Microsoft announced Monday that it has taken legal action seeking…
Cresta Posts Box by CP
We use cookies to ensure that we give you the best experience on our website. If you continue to use this site we will assume that you are happy with it.Ok